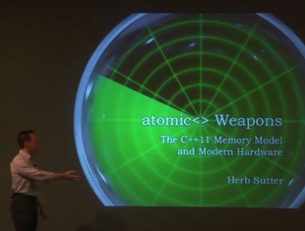 Most of the talks I gave at C++ and Beyond 2012 last summer are already online at Channel 9. Here are two more.

This is a two-part talk that covers the C++ memory model, how locks and atomics and fences interact and map to hardware, and more. Even though we’re talking about C++, much of this is also applicable to Java and .NET which have similar memory models, but not all the features of C++ (such as relaxed atomics).

Note: This is about the basic structure and tools, not how to write lock-free algorithms using atomics. That next-level topic may be on deck for this year’s C++ and Beyond in December, we’ll see…

This session in one word: Deep.

It’s a session that includes topics I’ve publicly said for years is Stuff You Shouldn’t Need To Know and I Just Won’t Teach, but it’s becoming achingly clear that people do need to know about it. Achingly, heartbreakingly clear, because some hardware incents you to pull out the big guns to achieve top performance, and C++ programmers just are so addicted to full performance that they’ll reach for the big red levers with the flashing warning lights. Since we can’t keep people from pulling the big red levers, we’d better document the A to Z of what the levers actually do, so that people don’t SCRAM unless they really, really, really meant to.